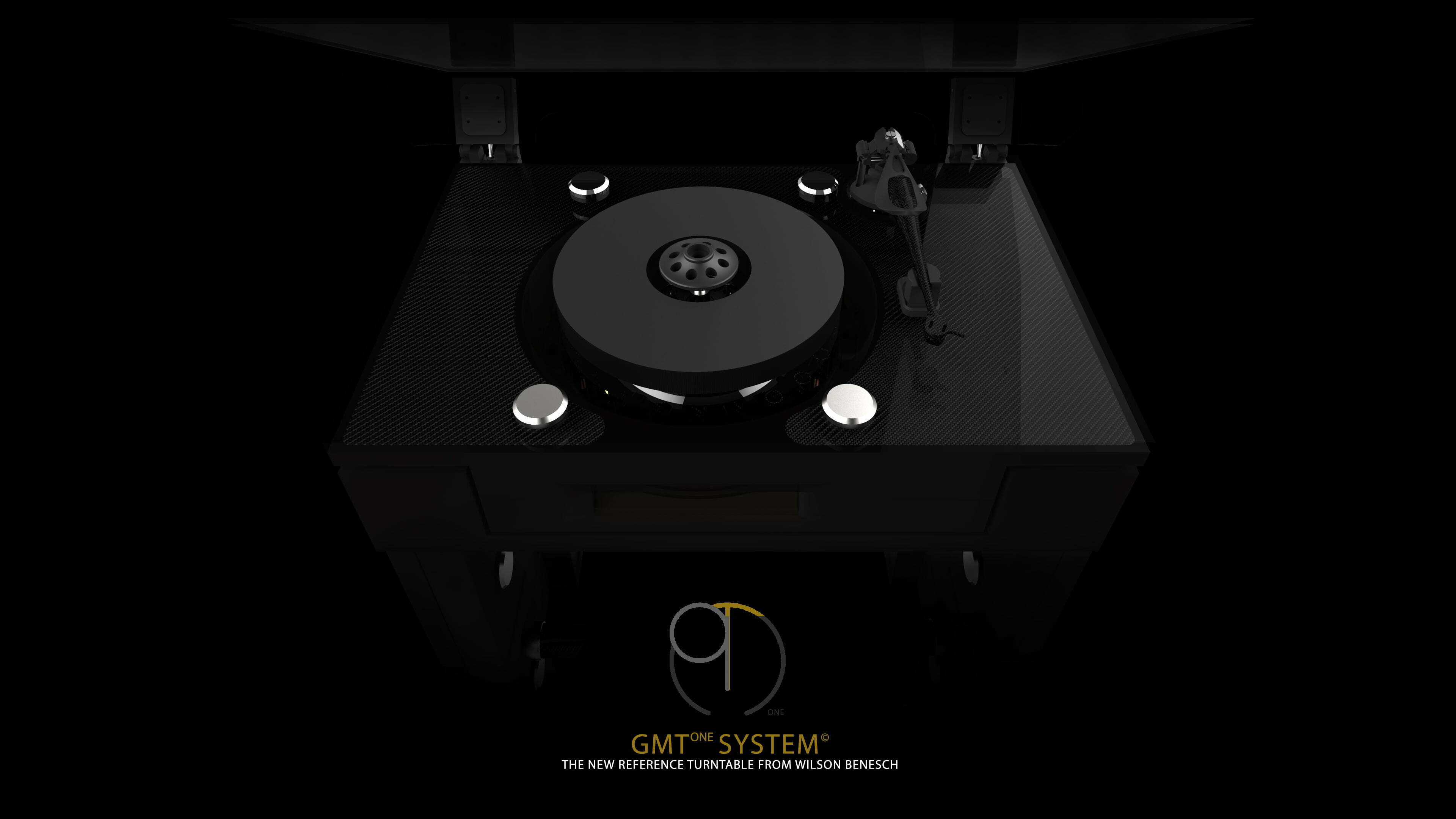 • The GMT ONE System © Turntable announced to mark Wilson Benesch’s 30th Anniversary.
• The GMT ONE System © features a new drive system called the Omega Drive. The Omega Drive is the world’s first axially orientated, precision magnetically geared turntable drive. The Omega Drive delivers unprecedented accuracy and virtually zero noise. Licensed and patented design.
• The GMT ONE System © has been developed with a holistic approach the turntable and all sub systems have been optimised to create a unified system. In addition to the Omega Drive, Wilson Benesch has developed the Alpha Isolation System, Piezo VTA System, three new tonearms and a dedicated new cartridge.
• The Alpha Isolation System developed in collaboration with a leading optical measurement system isolation company. The Alpha Isolation System is a microprocessor controlled pneumatic system that isolates the GMT ONE System © from vibration. Fully autonomous, operating with microscopic precision, within millisecond time-frames, providing isolation to 1.7Hz.
• Both the GMT ONE System © and the Alpha Isolation System are fully compatible with Wilson Benesch’s R1 HIFI Rack. Together the system forms a highly optimised complete analogue replay system.
• The Piezo VTA System is the world’s first remotely adjustable VTA. Fully controllable from the listening position, allowing unprecedented accuracy with adjustment to within 2.5 microns.
• Three new tonearms have been developed through collaboration with the AMRC Sheffield and the FEMTO Institute Besancon under the SSUCHY 2020 Research programme. The low-mass Moment Tonearm, a low-medium mass CTi-30 Tonearm and the medium-high mass Graviton Tonearm.
• Munich HIGH END 2019: Atrium 4.2 – E223 – The first public display of a the prototype GMT ONE System ©.

Wilson Benesch was founded upon an R&D project that gave birth to the WB-One Turntable in 1989. A subsequent design, the Full Circle followed in 1999. Both turntable designs featured novel materials science and technologies that when combined, delivered a new level of performance and design that did not exist before within their respective market sectors. In 2019, Wilson Benesch’s new GMT ONE System © sees this credo not only adhered to but celebrated, by presenting one of the most radical and innovative analogue replay systems ever seen before.

The result of more than 20-years of collaborative development, the GMT ONE System © ground-up optimised turntable design that represents a coherent unified solution. Developed under the project name ‘Mondrian Project’ – the GMT ONE System © which has benefited from grant funding from both the UK and Europe (on-going), allowing the company to draw upon the expertise of Professors, Doctors, Engineers and Design Engineers working at the forefront of cutting edge of advanced research within their respective fields.

This drive system does not rely upon a belt, it does not rely upon an idler drive, nor a direct drive system. The GMT ONE System © deploys a recently patented magnetic gear technology which shifts the paradigm by redefining a completely new mode of drive, the Omega Drive. For generations, the historical methods of providing “accurate drive” have stood unchallenged. The Omega Drive attains unprecedented levels of accuracy and virtually zero noise thanks to the axially orientated binary bearing design at its heart.

Any high precision system, especially those where measurement and transcription are concerned, rely upon structural stability. Wilson Benesch introduces the Alpha Isolation System to compliment the Omega Drive. Developed in partnership with an industry leading optical measurement system isolation company, the Alpha Isolation System achieves levels of isolation that function at the microscopic level where resonance is a major concern just as it is in vinyl transcription. Pneumatic rams that are electronically monitored provide precise levelling. Even if the system is disturbed during use, it will re-adjust within milliseconds to zero. The resonant frequency of the system is 1.7 Hertz.

Three new tonearms will be available to use with the GMT ONE System © at its launch. The new tonearm designs take the concept of vinyl transcription into the 21st-century. The reference tonearm Graviton © features a high modulus, geometrically optimised single piece carbon fibre tube. The armtube is further enhanced by a sandwich construction that achieves an industry standard in terms of specific stiffness. Joining Graviton © is a low mass design, Moment and a low-medium mass design, CTi-30. All three tonearm assemblies are based on uni-directional enhanced carbon fibre that is further enhanced by both carbon nanotubes and graphene. Each design is complete with headshell and counterweight components that have been additively manufactured using State-of-the-Art manufacturing technologies. Both 3D printed carbon-fibre – polymer components and powered sintered grown titanium components have been realised, achieving optimised geometric forms from aerospace materials technology and in the process a new benchmark in terms of performance within the industry.

The GMT ONE System © frames current technologies and renders them in the past. Imagine physically manually adjusting the VTA on a tonearm from the position of the turntable, whilst trying to hear the nuanced differences. Now envisage the future, being able to make the same adjustments remotely from your listening position to within 2.5 microns – a degree accuracy within VTA adjustment that has prior to now been unthinkable. The Piezo VTA remote control adjustment system, like all sub-systems in the design, is a result of collaborative contributions made by so many.

The GMT ONE System © redefines turntable design. It creates a new dialogue between the vinyl enthusiast and their replay system, changing the user’s experience of analogue replay forever and setting a new standard within the high-fidelity high-end audio market.